This is OUR wall!

My second two weeks with EHRA were just as great as the first.

As we drove into basecamp there were elephant tracks everywhere so we approached slowly. They had come through the morning before and we had not been unpacking for long before we hopped back in the van to find them up the riverbed. It was fantastic to see them again so soon and one was Cheeky the bull we had seen on last patrol. This must be a sign that we had a great 2 weeks ahead of us.

BUILD WEEK:
As soon as we arrived at the farm we were going to work at it was clear we had a big task ahead of us. The wall we needed to build was HUGE! It had to go around two water tanks as well as being at least 5ft high and there were no rocks in sight. On the previous build week we had only just finished the wall as the sun went down on the last day and that only had to go around one water tank! And we had rocks on our doorstep!The team were not phased though and all hands went to the pick axes and shovels as we started to dig the foundations. 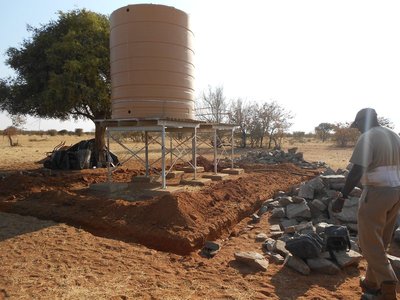 Rock run on this build week took on a whole new meaning. As the wall was going to be so big the trailer would not suffice and so we had to borrow a big truck and go on the hunt for rocks along the roadside. We were all covered in bruises and scratches from our efforst to pull out the rocks even if they were surrounded by thorns. Over the week we must have done about 5 of these loads and each time having to carry and throw all the rocks to the roadside, then into the truck, then off again and then onto the wall! Watch out at the next Olympics there think we may have found some contenders for weightlifting and shotput! 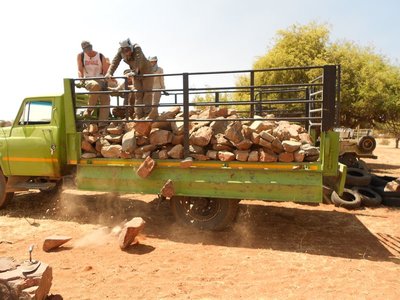 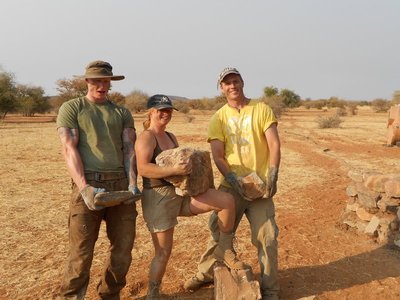 Everyone found their role to play and soon we were like a well oiled machine with 5 barrows of mix on the go, several builders, drivers and water fetchers. At times it worked so well that we even kept up with Matthias' demands and we were the ones asking him to build faster!

Here is some proof for Barristerman!! 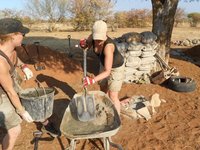 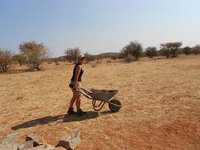 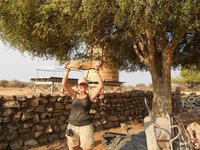 Although we were not able to finish the wall in the time we had we managed to get 3 sides up which was more than we thought possible.

This is OUR wall! 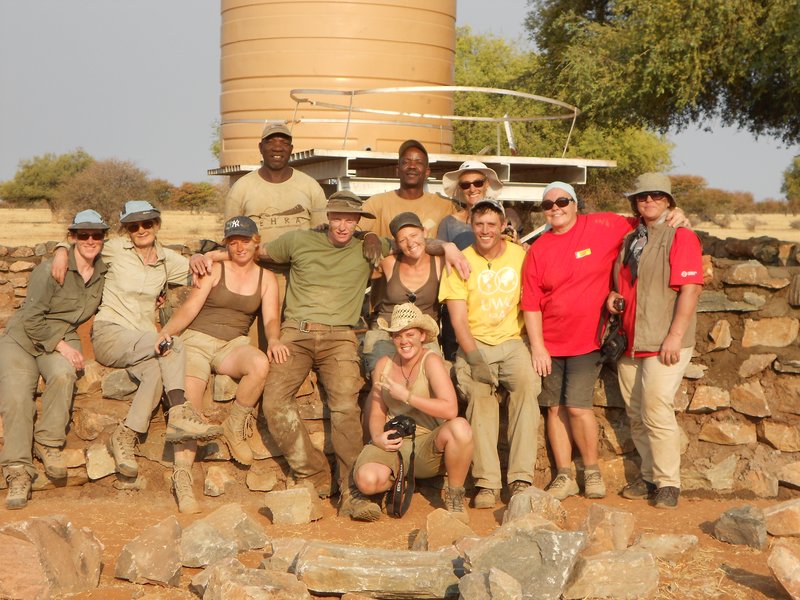 Patrol week was also very different as we were putting together identification kits and specifically wanted to find 3 Bulls that were new to the area and also the Ugab small herd to update their information. For each elephant we needed to get 4 shots, one front view with the ears out, one right side, one left side and the tail. Each elephant has a unique ear pattern and tail shape/number of hairs etc which helps to identify individuals. The group was split into teams so that when we found the elephants we would be given specific ones to focus on. 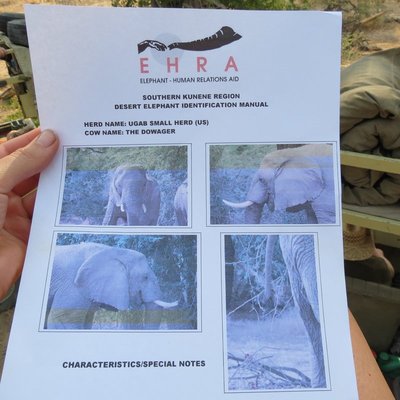 After a morning of looking for the elephants with no luck we stopped for lunch. As we casually made sandwiches and chatted away we had not noticed the shadows on the otherside of the riverbed where we had just come from. Everyone held their breath as the 3 bull elephants slowly moved behind the bushes to share a drink with the cows (as in moo) in the heat of the day. Quietly Hendrick gathered three of us with good cameras to go with him, Bruce and Matthias on foot across the riverbed to see if we could get some decent ID photos. They were only metres away from us and we were assigned our elephants to photograph whilst the guys told us when to move to different places to get the best shots all the time keeping us aware of where to go if the elephants decided to get a closer look at us too!! My elephant was a bit camera shy and spent most of the time scratching his bum on the water tank behind the other elephants so we left them in peace and caught up with them later in the afternoon. This was a more successful photoshoot with one of the bulls particularly keen to get his close up! 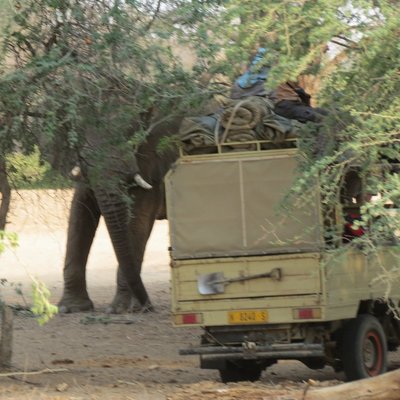 As I woke the next day I wondered what a couple of people were doing a bit further away from camp and it turns out the elephants had paid us a visit in the night and I had totally slept through the whole thing!! They were still only about 30 metres away so we packed up camp and jumped on the trucks. It was the 3 bulls from yesterday and they showed us that even though elephants can't fly (despite what a guy at a bottle shop tried to tell us) that they can climb! 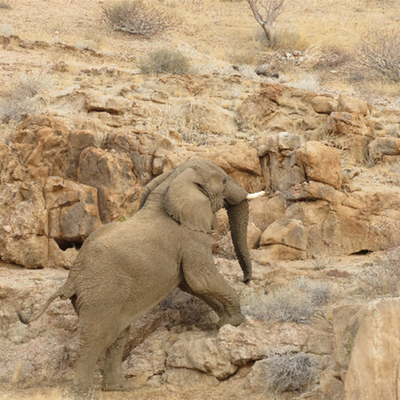 to a rich green riverbed

Our next task was to try to find Ugab small herd and as we tracked them the landscape changed from dry sand and rocks to a rich green riverbed with huge reeds at least 15ft high. As we pushed on through the reeds the riverbed got narrower and narrower until we could go forward no further, so we had to turn around and try another way after lunch. 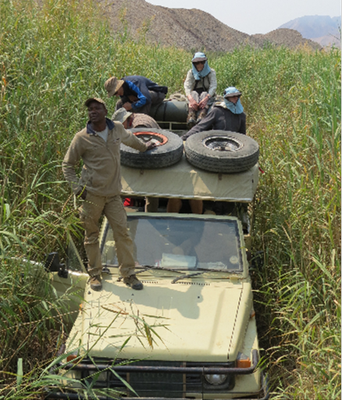 We found some of the herd in the afternoon eating the grass in the riverbed. There were 2 females and a juvenile of about 2 years old and we could hear the rest of the herd trumpeting not far away on the other side of the reeds. 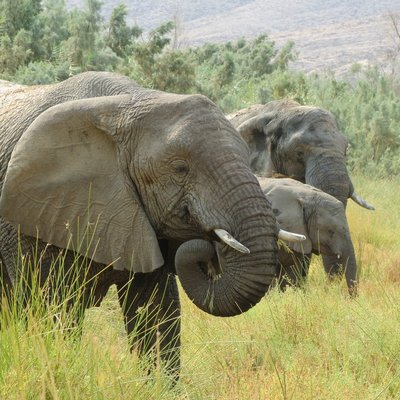 As we watched them peacefully a small rock in the grass next to them started to move! It was a tiny baby elephant only 2 weeks old and none of us had seen it in the long grass. On the summoning call of the matriach on the other side of the bushes the females moved off quickly out of sight and the baby tottered behind them trying his best to keep up. We tracked with the herd and took photos of them for the rest of the afternoon and it was lovely to see the interaction between them as a family group and how they moved together. 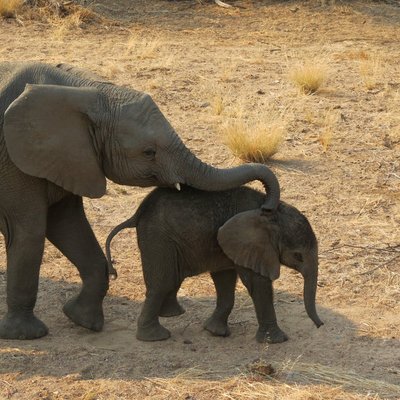 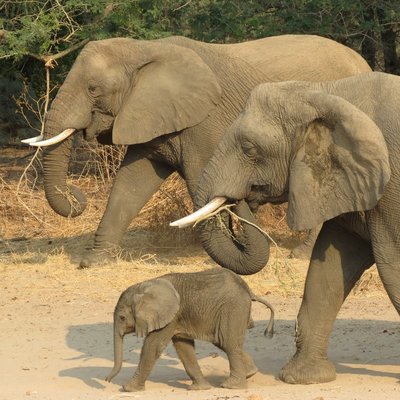 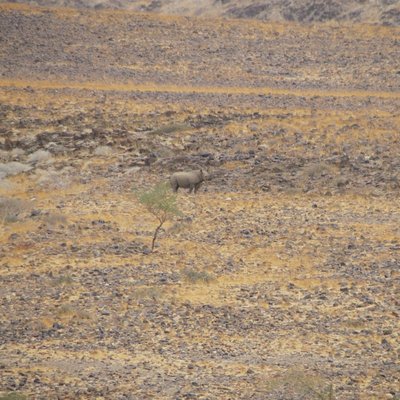 Thats right RHINO!! And we were lucky enough to see two of them!!

Incidents for the last 2 weeks:

A massive huge thank you to Ant, Chris, Chrissy, Jess, Nat, Jodie, Maz, Mags, Gabriella & Elke. What a team and what an adventure. I have some amazing memories and you all were so great. I'll be seeing you soon 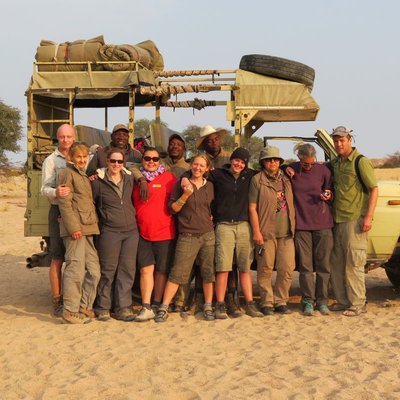 And Bruce, Matthais and Hendrick - you are all legends, thanks for your expert eyes, strengh and the laughter. 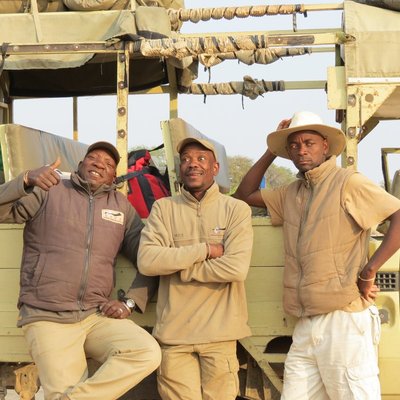 What an amazing way to start this trip! The last 2 weeks have been fantastic and I will try as best I can to sum it up here for you

Shouts of "More Mix! More Mix" became the mantra of this week as we desperately tried to keep up with Matthais' speedy rock laying and cement demands. We were constructing a 4 sided 5ft tall wall on John's farm north of Khorixas, to protect the water tank from the elephants and with no cement mixer it was all hands to the shovel mixing cement and sand with water in wheelbarrows. 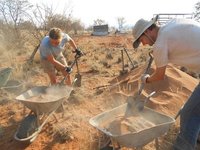 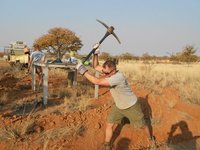 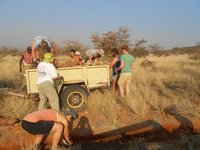 'Rock run' and 'sand run' were the other main tasks that needed to be done, filling the trailer full of as many large flat sided rocks or sand as possible to take back to the wall. This was repeated several times a day and we all became rock experts not only in selecting them but throwing them too, although some could throw in bigger ones than others! I think the sun got to us a bit at times as when you found a good rock it became 'a beautiful rock' and there were definately some instances of random dancing around the wall and lots of loud cackles of laughter!

Everyone needed the 2 hour siesta at lunchtime after all the back breaking work in the heat and also looked forward to the dinner cooked on the camp fire in the evening. On our duty Marcia and I cooked lamb tagine which I am assured was delicious. I'll definately be taking note of some of the recipes and gem squash is now a new favourite! 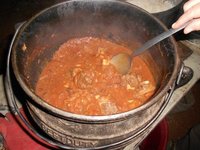 Once you could only see the top of my hat behind the wall we knew it was tall enough. Completing the wall was a great achievement from digging the foundations to the laying of the final rock. 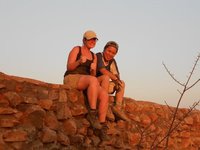 On our first morning of patrol week we were lucky to find 2 young bull elephants Cheeky and Tsuarab who are about 25-30 years old. Matthais and Bruce spotted them after climbing a rocky outcrop and we all clambered up to get our first view of the wild desert elephants. 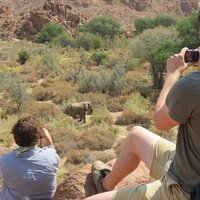 The second day we caught up with Mama Africa herd and G6 herd together. It is amazing how so many large elephants hardly make any noise apart from the cracking of the branches as they eat the trees. We were able to get really close and watch them for over an hour. There were several calves in the group only 3 months old and watching them trying to use their trunks was so cute. One tried to mimic the way the older ones kick dirt into a ball in front of them to pick it up and throw over themselves but he couldn't quite get the hang of it! 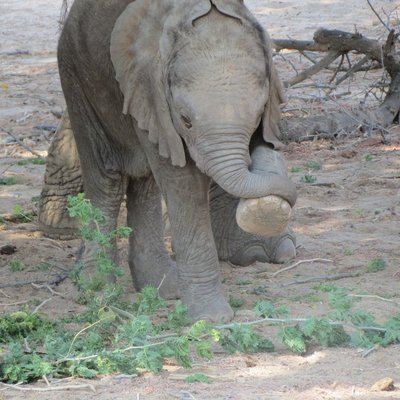 The females in the group protectively flanked the little ones when they came closer to the trucks and also provided shade for them to take a nap in, although a mischevious one had different ideas and kept jumping on the others to wake them up.

One young bull who is known for coming close to the trucks in hope of finding oranges which are a favourtie he likes to steal came right up to take a closer look, even feeling inside the cab of the truck and touching Bruce whilst searching for them. Finding no oranges he was content to eat the tree next to us but as he let go of the branches they kept hitting Flo in the face who was sitting on top of the truck. He kept so still whilst this was happening it was hard to stiffle the laughs as it looked so funny. 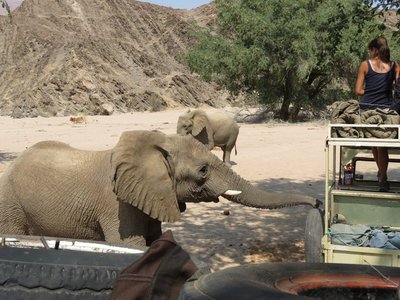 Two young bulls started play fighting and jostling with each other right in front of us, wrapping their trunks together and with an almighty headbut trying to push each other back. You could see them stretching and trying to get a better grip on the ground whilst squaring up to each other. Incredible to see u so close! 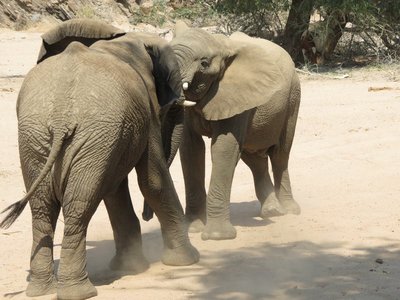 INCIDENTS IN THE LAST 2 WEEKS...