As mentioned previously we were keen to do some volunteering in this last leg of our travels. I think that after travelling for so long both of us were missing that sense of being part of something, rather than move from one tourist photo opportunity to the next. The frustrating thing was that the volunteer projects we were finding online would cost us more than our budget would allow, we had the time and enthusiasm but not the cash to get involved. We hoped we would stumble on something locally and try to help...

Whilst browsing on trip advisor for things we could do around Ubud whilst we did our yoga I was surprised to see that that BAWA (Bali Animal Welfare Association) clinic was coming up top as a place to visit. I think BAWA was coming up so highly rated because people really believe in the work being done to help the animals. This is not a 'tourist attraction' but by tapping into this area and building awareness of the problems and need for help BAWA hopefully can get the donations and support they need. After reading several people's accounts of the great work being done at the clinic I wanted to find out more and whether we could help.

I checked out their website www.bawabali.com and found that there was opportunity to volunteer if you can commit to a minimum of a week and it would also cost us nothing but our time and hard work. BAWA were upfront about how being at the clinic could be quite difficult and upsetting for some people, and to be prepared that the standards of the clinic are not comparable with vet clinics back at home due to lack of resources etc... Now being an animal lover and given that I can't watch Marley & Me without turning into a blubbering wreck, I needed to make sure I could handle the situation to be able to help rather than be a hindrance. Dan too was unsure if he wanted to see animals who were suffering, even if we were there to help, so we organised to visit the clinic first.

The clinic was an assault on the senses! As we pulled up in a bemo outside the noise of all the barking was incessant, and then as we walked through the gates we were hit by the smell too. With so many animals to look after there was a lot of poop being made faster than it can be cleared away. Volunteers and staff were rushing around doing their morning feedings and cleaning and we were introduced to Kim who took us around the clinic and told us more about BAWA.

It was talking to Kim that really brought home the issues of animal welfare in Bali and in particular the problems this creates for Bali dogs.

As soon as we got to Bali we saw dogs everywhere, roaming the streets. Bali dogs are a hardy breed that know how to look after themselves on the street. A lot of these dogs are actually owned by people but they are allowed to free roam the area and without being neutered results in more and more puppies. As we stood in the yard we could see several puppies in cages that had been abandoned at the clinic overnight, which we found out was a regular occurrence. 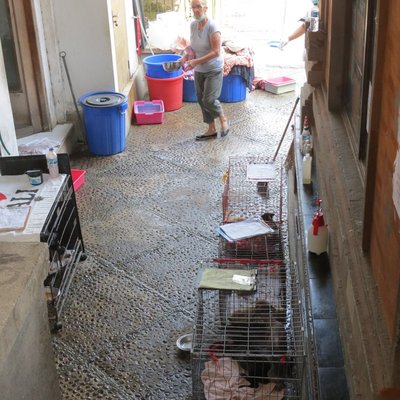 We were told how there is a cultural difference in how animals are seen and treated in Bali. With animal sacrifice part of the culture here, children see animals killed from a young age. In particular dogs with this type of colouring are used in sacrifitial ceremonies. 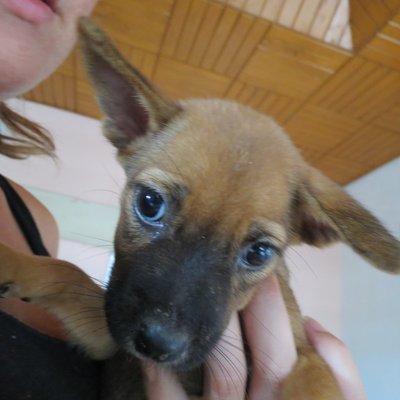 Kim explained that this does not mean to say that the people in Bali do not love their animals but there is a difference in what is deemed acceptable in terms of how to look after animals, with seemingly simple things such as don't keep them in a cage in the sun, make sure they have water etc... being overlooked. As well as looking after and rehabilitating animals it was impressive to hear that BAWA also works to educate local people about animal welfare too including programmes with local schools.

BAWA will only take an animal in if it is really ill, had its life threatened or in the case of puppies unable to fend for themselves. They try where possible to treat Bali dogs on the street, going back for repeat treatments and feeding as necessary. The reason for this is that Bali dogs are very territorial with a patch of about 3km and if they are out of that area for too long then they will lose it. If a dog needs to be brought into the clinic, then there is a 10 day window before it loses its territory. Dogs that they can't take back they work to rehabilitate and re home. If a dog becomes or is seen to be a nuisance it is not uncommon for them to experience violence, and BAWA sees many dogs with horrific machete injuries and has even helped dogs that have had their throats deliberately slashed! Volunteers play a big part in helping to socialise traumatised animals so they learn not all humans will hurt them so they can find a new home. 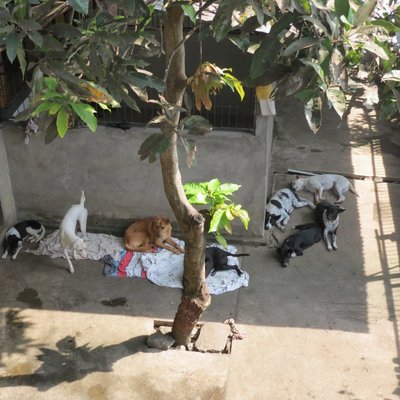 I was surprised to find out that Rabies had come to Bali as recently as 2008, which resulted in a mass cull of dogs. If your dog wasn't collared and chained up the government had ordered it would be killed. This resulted in dogs being tied up in the wrong way and BAWA sees many dogs with appalling neck injuries from chains/collars that have not been made larger as the dog has grown and so become embedded in their neck. There was an immunisation programme so if you see dogs with the yellow collar like this guy or a red one then they have been vaccinated for rabies. 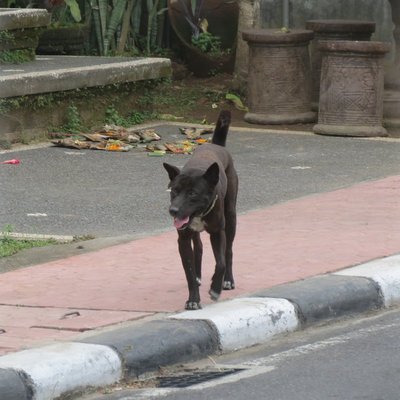 We had to show that we had had our rabies vaccinations before we could volunteer at the clinic, and would be trained how to deal with bites if this was to happen. The only way to definitively test for rabies is by examining the brain after the animal has died. As the clinic does not have the resources to do these tests they need to send the brain off for analysis and the only way for them to do this is to cut the dead dogs head off so we were warned that if a dog with suspected rabies died at the clinic whilst we were there that there was a possibility we could see this. Not very pleasant but with limited resources this is their only option.

Whilst walking around the runs downstairs full of puppies and dogs, we told the story of one of them, Kampil, who had been rescued from the dog meat trade! He was found outside the clinic trussed up in a sack with tape around his muzzle which is how traders normally bind them, looks like someone tried to save him by leaving him at the clinic (he was to become one of my favourites). Now we had heard of people eating dog in Vietnam and have posted previously about some of the methods used and people's pets being stolen for the trade etc but I did not realise this was an issue here too and BAWA try to rescue these dogs where they can.

Another problem in Bali is 'breed' dogs, such as golden retrievers and huskies, which are seen as a status symbol. These dogs are not made for the Bali climate and so are prone to skin diseases, resulting in fur loss. This could be simply treated but instead of doing this the trend is the dump the now 'ugly' dog and get a new one. Another problem is that many people do not have the money to be able to look after these larger dogs, they are innately not as streetwise as the Bali dog either to fend for themselves properly, becoming malnourished. This is the lovely Atlas who was found in a gutter practically a skeleton and after 6 weeks of care he has made an amazing recovery. 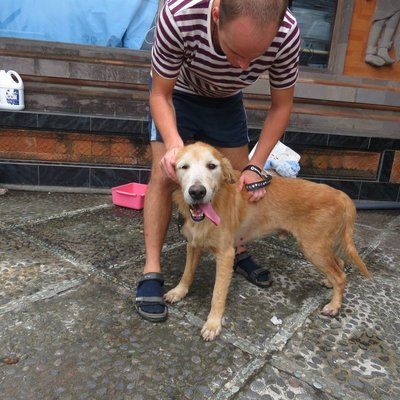 It was a lot to take in but after seeing the animals and hearing about the problems they faced we knew we wanted to help.

I had particularly fallen for this little escape artist... 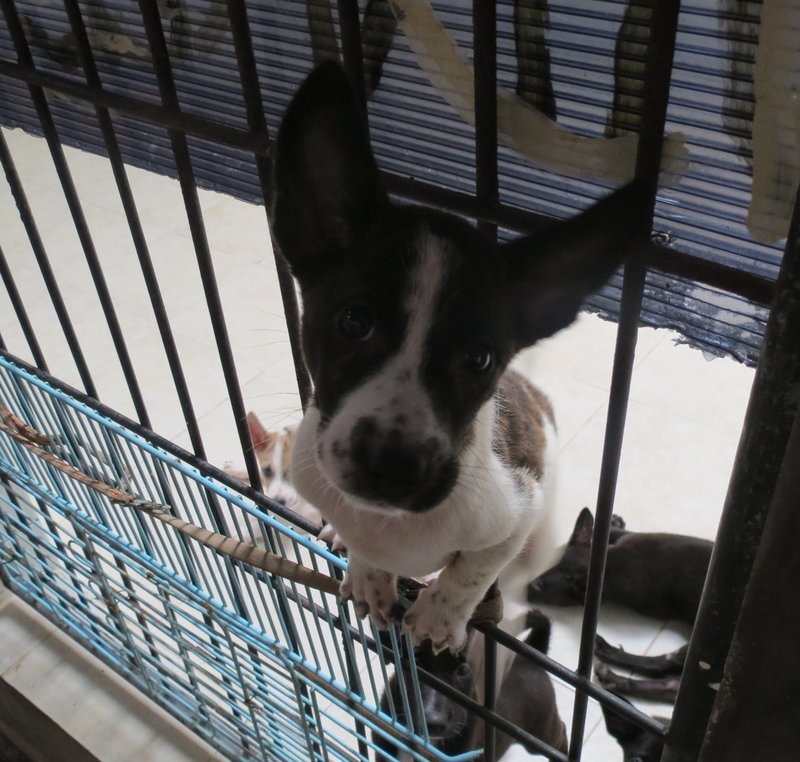 It would be a tough environment to be in and I could see us getting emotionally involved but we decided to put any reservations aside. Any discomfort or upset we would feel seemed insignificant compared to some of the suffering we had seen/heard about.

We decided we would extend our stay in Ubud after we finished yoga so we could commit to a week volunteering and help where we could. We were prepared for mucking in and mucking out!

We miss Merlot and Alfie our family dogs at home!! 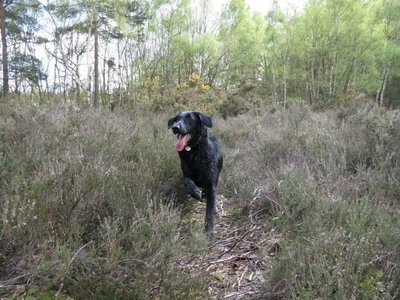 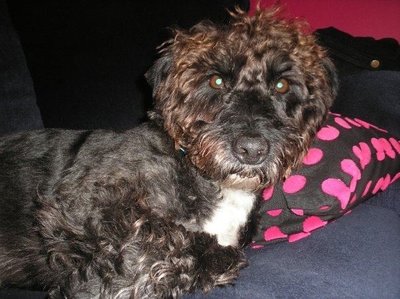 Posted by doyledan 03:17 Archived in Indonesia