Leaving the beauty of Mount Cook wasn't easy, you could stay in that area for a day just admiring the view. However, we had an exciting activity to look forward. The Rangitata Rafting just outside of Christchurch offers the chance to ride up to Grade 5 white water rapids, which is the highest that you can commercially experience and it has the added bonus of the Southern Alps as the scenic backdrop. We would be staying at the headquarters of Rangitata Rafts but in order for us to be on time we were picked up at one of our stop offs to get ahead of the bus.

Upon reaching the headquarters we were given lunch as part of us purchasing a rafting experience and we tucked into a BBQ whilst taken through the ins and outs of the rafting experience. After the prep talk we sized up our gear for the day and what was great was that everything was provided. We were so lucky that the weather was really nice, the sun was beating down and so wearing a wetsuit was a bit of nuisance so when we got the call to get in the van to take us to the water Sarah and I got in as quick as possible. 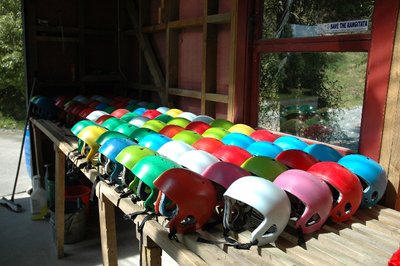 Driving down to the starting point our driver from previously gave us some stories about the owners of the huge sheep stations that covered the whole area. Initially he explained that for a long time these vast stations were part of the families who originally settled on the land and stayed with them for many years. However, in later years the stations were not doing as well and were sold on to other people. It was with this exchange that Rangitata rafts would eventually be created as during the period of downturn the owner of the sheep station decided to offer locals and what their was of tourists the opportunity to go down the river by raft that was on his land to help subsidize the ever growing finances needed to run the station.

But apparently this owner was noticeably doing better than most of the farmers in the area and people become suspect. The police got involved and sent up scouts to see what the guy was up to. From a distance they saw that the sheep station owner would go out every other day for long periods in his helicopter, and upon closer inspection they noticed that he was decorating the helicopter up as if he was the police. This of course took the police officers by surprise. It turned out that the sheep station owner was flying to the remote plains where bikey bandits had been growing Marijuana in large quantities and would swoop down pretending to be the police in order to scare of the bandits, then he would load up the helicopter and fly it to a contact who would then sell it on.

The guy was eventually charged but I think he wasn't given a heavy sentence because he wasn't selling it, but was merely trafficking it. It was something like that, some silly loop hole in the law system. But you had to hand it to him.

After that story we were at the starting point of the rafting. Our guide would be Dan and before we set off we had a group photo with the beautiful backdrop, it was such a good day for it. 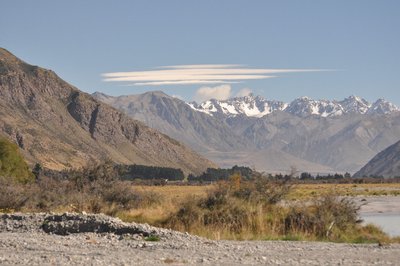 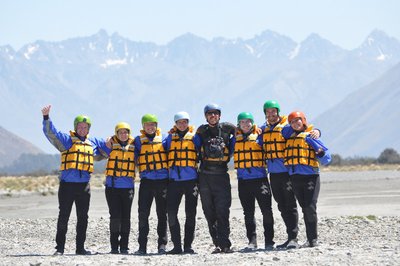 The first part of the river is a grade 1/2 and it was here that Dan took us through the different calls he would be making during the more challenging rapids, such as GET DOWN, PULL LEFT! PULL RIGHT!, he mentioned that we shouldn't be alarmed when he bellows the commands out referencing some of the small Asian women who would hear his shouts and freeze with fear!.

Then it was game on from this point, the first grade 5 we would hit was pretty choppy. Dan had told us that the river was not at its highest and could be at least another metre higher. The amount of tonnes of water that were passing past us equated to something like 72 baby elephants but when the water was higher the force of the water was magnified even more. We stopped off before the big rapid so the guides could figure out the best direction to take. Despite there vast knowledge they still need to approach the rapid with caution because one wrong move or position could mean flipping over. After a quick check we jumped on board and went for our first rapid, it was EPIC!! 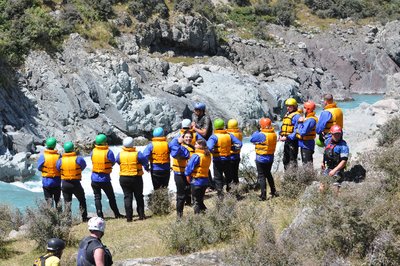 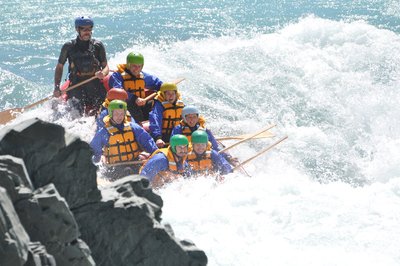 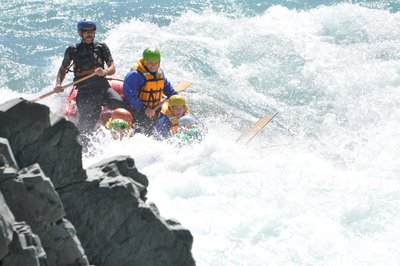 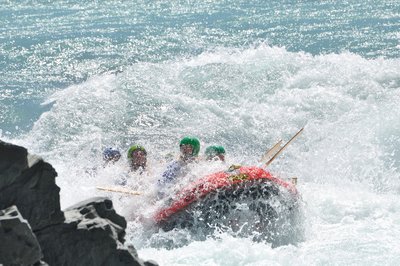 We made it all on the boat and put our oars together for a cheer!

Moving down steam the valley was so good to look and made the experience even more worth it. 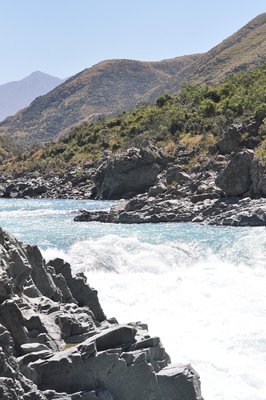 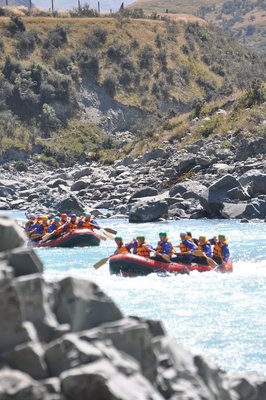 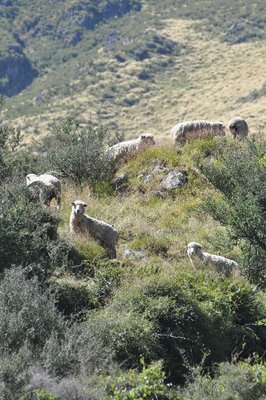 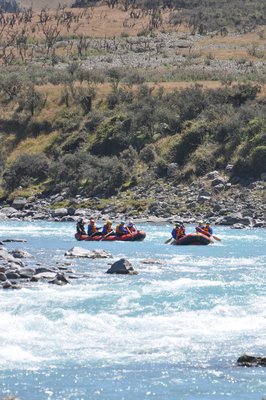 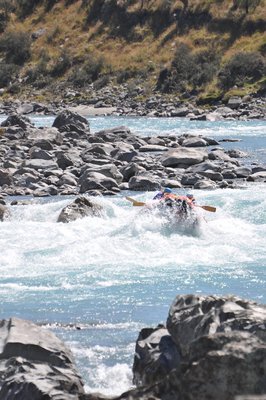 The next Grade 5 we would hit was bigger, longer but we were ready and after a quick check from the guides we went for it! 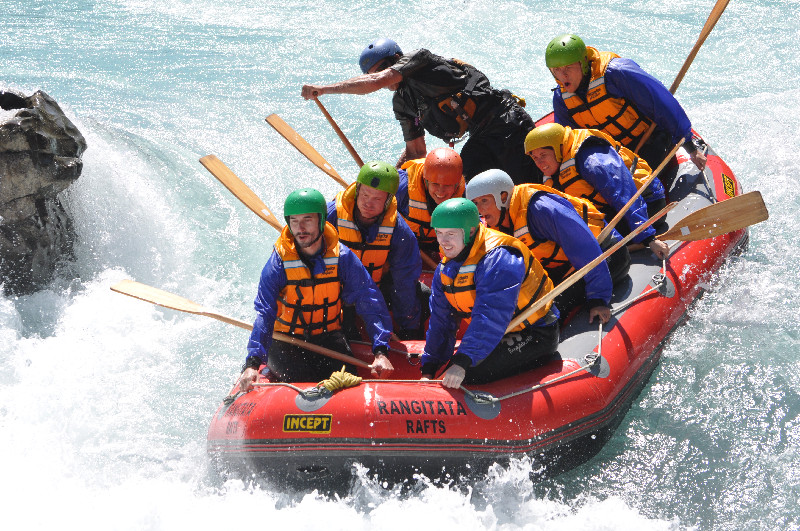 It was so much fun, Sarah and I high five'ed with a big whoo hoo!

Afterward it was plain sailing and we felt like we could take on more, Dan did some fun stuff on some of the smaller rapids so we could experience the raft taking on water and potentially flipping over and at one point he twisted the boat and half of us fell in. He said that was a trick the guides do to teach us a lesson not to be too cocky :-)

Another cool add on was that we wre allowed to jump in the water at saver points in order to experience the rapids and the power they yield. so stopping off at a calmer pool we hooked onto a rock and we all jumped off into the gushing water and floated downstream. At the end of our floating was the cliff faces that we could have a go at jumping off. Sarah decided not to because she didn't want to lose her contacts but I had a go. It was 9 metre's high, and despite having down a bungy it was still a bit scary as I jumped off! 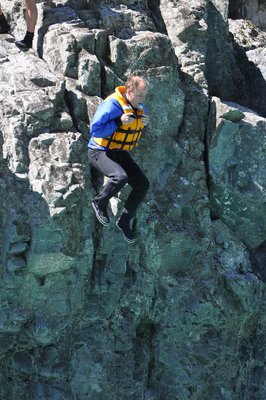 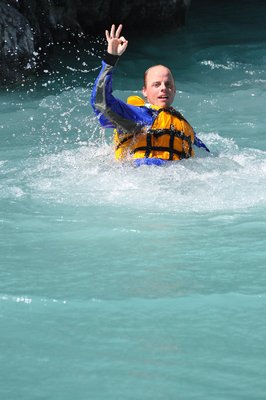 It was a perfect way to end our three weeks of adventure activities and as a team we picked up our raft headed back to base for complimentary lunch. We can't recommend Rangitata Rafts enough, the guides were great, the service was top notch and the added bonus of great scenery and price which includes lunch and Dinner makes it worth it. 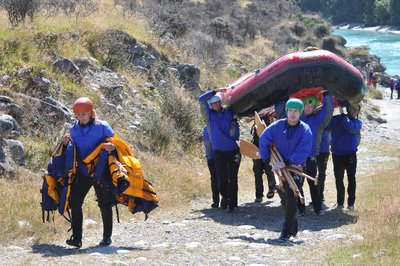 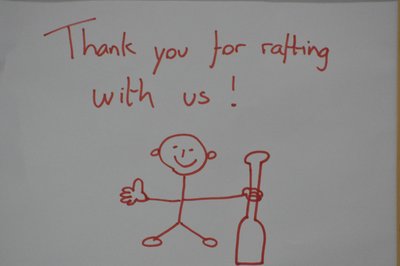 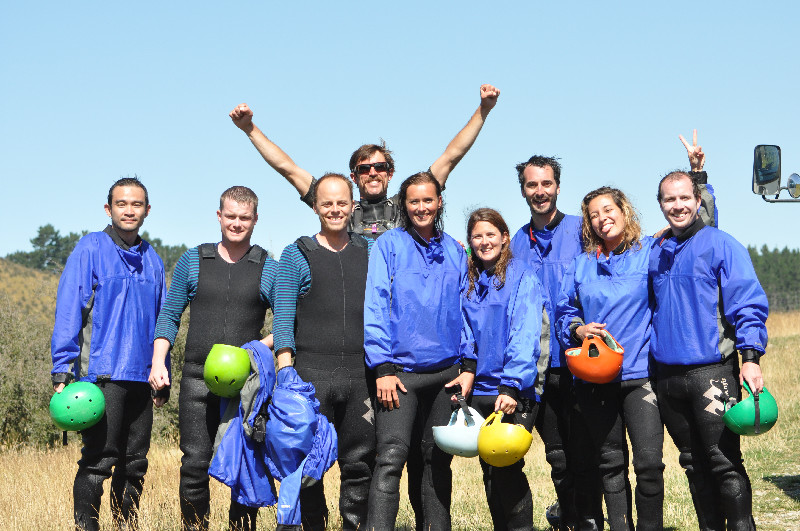 Stay tuned for the last tale.